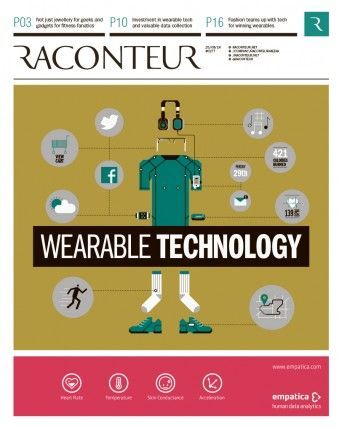 We’ve all been waiting for a mobile revolution that didn’t come, replaced by slow evolution. Meanwhile, we have lived to see the real revolution of wearables. The development of wearables is proceeding at a rapid pace, with new devices multiplying not over years, but over months. The first was smartwatches, but right after that there was already talk of smartglasses. Now comes the era of smartwatches and smartcans.

Raconteur Media has just published a report on Wearable Technologies, or wearable technologies. According to analysis, The wearables technology market is expected to grow as much as tenfold in the next three to five years at most – Its value in five years is expected to be as high as $50 billion. Therefore, we can talk about the wearables revolution, compared to the mobile evolution – such growth is up to Five times faster than the growth of the mobile market.

Just look at the history of the cell phone, and the history of wearables. It can be said that the prototype of the smartwatch was created in 1975 with the watch-calculator from Casio. However, the revolution in terms of devices, which today we count among the strict ranks of wearables, has proceeded much faster and directly before our eyes. In 2021, the first fit band was created, which is the Nike+ FuelBand. In the same year, the first smartwatch, the Pebble, saw the light of day.

The year 2021 brought a number of smartwatch launches, including the Samsung Galaxy Gear, as well as the first Google Glass smartglasses. Less than a month ago, Apple unveiled its first wearable – the iWatch.

The report itself, prepared by Raconteur, is extremely comprehensive. It was prepared for The Times, hence its newspaper format. The report does not contain mere charts with statistics, but rather a handful of articles for those who are interested and intrigued by the world of wearables.

We strongly encourage you to read the entire report, as the articles introduce the reader to almost every aspect of the wearable world.

Wearable devices are not just gadgets for geeks or sports enthusiasts, although this opinion still circulates among many people. These are tools that can make life and work significantly easier for many people. According to Raconteur, 8 million people in the UK own devices that can be categorized as wearables.

53% of owners of these devices say they have better control over their lives thanks to them. 1/3 owe their professional development to wearable devices. An analyst at Forrester Research, J.P.

Gownder, argues that in a few years, the number of wearable devices purchased for businesses could significantly outstrip those purchased by individuals for private use. His opinion is shared by many other specialists. Wearables can find applications in any job, where both having both hands free and receiving information in real time are equally important. All wearable devices equipped with a camera can also greatly help in bringing documentation under control, through the use of barcodes, for example.

Wearables can be successfully used by a warehouseman, a food supplier, as well as a healthcare worker.

As we well know, the mHealth sector is thriving. Wearables can be used not only to monitor one’s health at home, but may soon be standard equipment in many hospitals, Where the patient, instead of being “tethered” by cables to the bed, will be able to wear the sensors on themselves. The devices may also come in handy for doctors themselves, who will thus have a better insight into the patient’s condition.

Motorola already offers seven different types of devices designed to help public servants do their jobs – the devices can inform you if a police officer is injured in the line of duty, or if you are carrying an unsecured weapon. However, not everything is so colorful. Before wearables make work and life easier for millions of people, there are still considerable stairs to overcome – the cost of the devices, their battery life and their adaptation to existing systems.

By 2020, however, wearables are expected to become quite commonplace in all sorts of businesses.