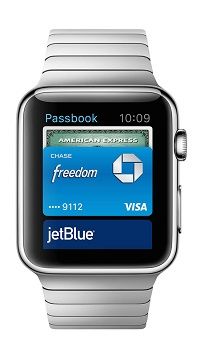 A few days ago we wrote about Apple's upcoming mobile payment system. And the day before yesterday, the Cupertino-based company held a special event at which it was revealed what Apple Pay – for that is the name given to the upcoming payment system – will be.

The U.S. giant has decided to equip the iPhone 6 and Apple Watch with a service that will revolutionize payment methods and, in the process, further bind users to the aforementioned devices . The purpose of Apple Pay is to "throw out" credit cards from our wallets and, as a consequence, probably replace them completely.
How the technology works, the consequence of which is expected to change the daily habits of millions of people? Via proximity communication, Which will be made possible by the iPhone 6 and Apple Watch's built-in NFC antennas. Moreover, Apple's new smartwatch will allow owners of older iPhones’to use Apple Pay.

Exchange for iPhone 6 will not be necessary, provided you buy the watch.
The described contactless payment system will require registering a credit card with iTunes. After that, it is supposed to be much easier: unlocking the wallet app (running on the iPhone or watch) requires only a tap on the screen (Touch ID technology will scan the fingerprint) and bringing the device close to the NFC reader. For larger amounts, an additional security feature will be the need to enter a PIN code.
Apple has also taken care of the basic issue, namely transaction security. The credit card number, stored in iTunes, as well as the holder's personal information, will not be passed on to the merchant. It will only receive a special code in the form of a generated token.
Apple Pay will not only allow transactions at traditional stores (the conference boasted partnerships with Staples, Subway, MacDonald's, Whole Foods, Sephora, Disney, Groupon and many others), but also mobile apps such as the Uber we've described. So owners of hardware with the logo of the bitten apple, will be able to make offline and online payments in a fairly simple and convenient way.
Whether the old-new (payments using NFC communication is not a revolutionary idea, after all) idea Apple has a chance for market success? The brand's loyal fan base, as well as established partnerships with giants of the financial market (American Express, MasterCard, Visa and such banks as Bank of America, Capital One Bank, Chase, City Bank) and the commercial market, allow for a rather optimistic outlook.
Apple has something to fight for. The data, prepared by analytics firm eMarketer, shows a fairly clear trend in the growth of mobile payments. Over the past year alone, the value of money spent in this type of transaction increased by 114.5% and reached $1.6 billion in the US. What's more, the number of people using their smartphone as a payment terminal is also increasing.

In the United States, there was an increase from 7 million people in 2021, to 11 million in 2021.
Apple Pay will launch in October and will be available as an update in iOS8. For now, the system is expected to work only in the US.
Source:
http://fortune.com/2021/09/09/apple-announces-new-mobile-payments-system-apple-pay/
http://www.theverge.com/2021/9/9/6127587/apple-watch-works-with-apple-pay-to-replace-your-credit-cards